I hate the mall. I hate being there. I hate feeling like I have to buy something if I'm there. I'd much rather be doing something productive than wasting my time shopping for stuff I don't need.

But when your wife needs a 2.5hr emergency root canal,

AND her dentist's office is 45-mins away from home,

AND you're with your 9-month-old,

AND it's raining outside,

AND the mall is the only place within 5-minutes of the dentist office,

AND the only other viable, indoor hang-out within a mile is IKEA,

THEN you don't have much of a choice.

So I found myself at a higher-end mall on the west end of Toronto. The worst part about the mall is the food court. How can someone possibly make a healthy decision when KFC, McDonalds and Arby's are your restaurant choices? Even the so-called "healthy" salad bars were crap with their sub-par tomatoes, browning lettuce and rubberized chicken.

I almost broke though and bought an Arby's Roast Beef Sandwich combo complete w/those curly fries (I don't think I've had one of those since high school). But, I thought, if I'm going to use up my weekly reward meal, I'm not wasting it on cheap garbage. So I got the heck out of the food court and went walking.
I was HUNGRY. I had just finished a kick-ass workout (more on that tomorrow) an hour and a half before, so my body was jonesin' for some grub. So right between a Club Monaco and a Banana Republic (like it matters) is a sushi "booth". So I go up to the lady and ask for some sashimi (instead of all the "prepared" sushi with the sugar rice in the display fridge). I end up spending about $17CDN for 15 pieces of paper thin raw fish.

Be prepared. Pack the chicken breast you barbecued last night so that you don't have to spend 20 bucks just to eat some mediocre sushi at the mall. [It was worth it though because at least I know I'm putting something relatively good into my body (relative to a Big Mac, I guess)].

...And encourage your family to FLOSS, so that we don't end up in this predicament again!

To your dental hygiene,

Trust me, Trish and I pack our food all the time. Even if its just to go down the street. But hey, I'd take an Arby's combo any day, then chicken breast and broccoli! =) 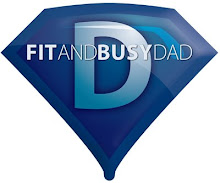 FitAndBusyDad
Toronto, Canada
I have 5 kids...4 daughters and a son. I'm a happy & devoted husband. I drive a mini-van. I make oatmeal every night for breakfast the next day. I give my kids a bath every other day. I make dinner each night after I get home. I pick the kids up from school/camp/daycare/practice. I coach my 12-year-old's volleyball team. I taught my 7 year-old how to do her math homework using a white plate and dried lentils. I coach my 5-year-old's soccer team teaching her and her teammates the difference between playing soccer and picking flowers. I tell "knock, knock" jokes with my 3-year-old. And I dote over my 8-month-old son for the sole reason that I now have an ally in the family who is testosterone dominant. I'm a regular guy who just loves what he does for a living. Between all of this, I find time to stay in shape. I'm the FITandBUSYDad!!!